Among the more dangerous of public service jobs is that of a highway worker. From 1944 to 1999, says Tom Miller, fifty-five Nebraska Department of Roads workers were killed after being struck by passing motorists.

“That’s at least one killed per year,” says Miller, a senior highway maintenance worker based out of Elkhorn. In remembrance of those workers, and as a caution to motorists to watch for his brethren, he has created a very special moving memorial.

Miller, 52, has restored a 1935 Ford 1 ½-ton truck as a roads department work truck of the era. Affixed to the side of the truck is the name of all 55 of those workers who lost their lives while on duty.

The interior of the truck – with torn canvas seat cover and lack of door panels – reflects its Depression-era working status.

Miller says all trucks had “slash” marks on the tailgate, indicating the direction motorists should travel around the truck. “They don’t teach that anymore,” he added.

Tom Miller with his father John and the 1935 Ford at a recent antique truck show at the Nebraska Crossing outlet mall near Gretna. Before customization as a roads department truck, it had to lose four feet and a corn sheller.

It’s fitting that the truck should commemorate those workers, Miller said, as the ’35 Ford ton-and-a-half was THE workhorse of the road department. “It’s much, much smaller than trucks of today,” he said. “You could fit one of these in the box of one of our 2007 Sterling dump trucks. But back then, this was the truck.”

For that reason, Miller didn’t “prettify” it. Its canvas seat cover is stained and torn. Its road flares and kerosene cans show chipped paint and rust, as does the “Men Working” sign on the box tailgate.

“I wanted it to look like it did day-to-day,” he said. “These trucks were used for WORK, when most of the work was done by hand.”

As a road worker himself, Miller runs snowplows on West Dodge Road from 120th Street out to Miegs St. in Valley; during the summer he’s a highway striper. A Fremont resident, Miller said he’s had an interest in old cars ever since he was five years old, and recently restored a 1931 Ford Model “A” Deluxe roadster, an ‘82 Corvette, and a ‘57 two-door hardtop.

But it wasn’t his idea to do the truck. He said had just finished a patrol car restoration for the state patrol, “and then my boss saw it and said ‘Nice – why don’t you do one for us?’”

He found the truck in Uehling, Nebraska, in 1999 and soon began the three-year restoration project.

The truck didn’t have a dump box when he found it; it had a corn sheller on it that had to be removed. A box was found on another truck in the Ponca Hills area, and to make it fit on the chassis, the truck had to be shortened by four and a half feet. The engine was also frozen up, but a family friend, the late Ralph Crisp, got it running again.

Miller even found a period water bag for cooling the radiator. 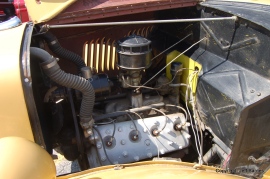 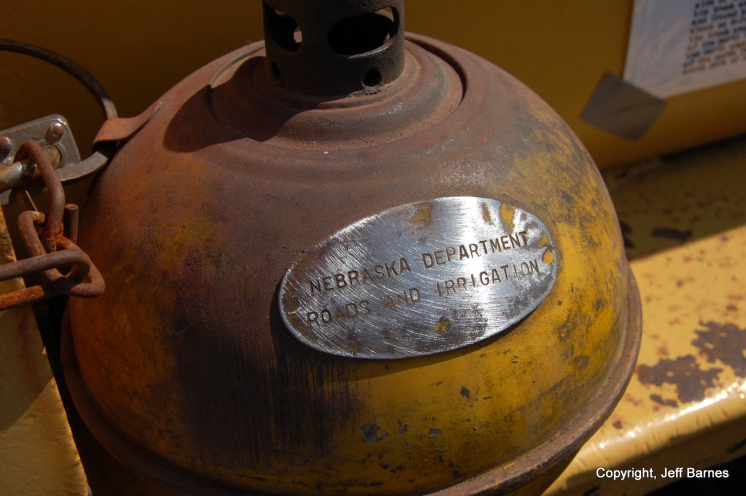 When he got the truck, it was missing the radiator shell. “And those are VERY hard to find,” Miller said. “I eventually did find one in a barn at Wahoo, but was going to pass on it since it was so bent up and dented.” His father John Miller, 85, took a look at it, however, and said he’d be able to fix it. He did.

Miller doesn’t consider the truck complete; he’s still searching for a plow for the front end which may take awhile. That doesn’t keep him from displaying the truck at shows or taking it out for other special events. It was the first vehicle across the West Dodge Expressway on July 27, 2006, after that roadway was opened with John Craig, director of the Nebraska Department of Roads, riding with him.

Thankfully, said Miller, the death toll on highway workers has dropped. “We’ve made fines higher and made the public more aware,” he said. “Fatalities have dropped significantly – is IS working – but this will continue as a rolling memorial to remind people about the danger.”