Yutan, Neb., man assembles a shrine to the blue oval

There are probably a few more graphic expressions you could use when you first walk into Jim Murray’s garage near Yutan. From floor to ceiling, he has assembled pristine examples of the past 75 years of Ford Motor Company production. Among his 20 Fords you’ll find sedans, coupes, pickups, a hot rod, a dragster, a sports car and usually something unusual about each one.

He nicely framed the collection in the metal building with automotive advertising and other car ephemera to make this an ultimate man cave.

“I’ve always been a car nut,” said Murray, 62, “but I didn’t have the time or money ‘til the kids were out of school and out of the house.” He retired a few months ago from his drywall contracting company; sons Mike and Greg now run the company with Murray helping out occasionally.

Murray previously operated the company in Texas and California. While in California in 1991, he came across the car that started it all – a 1967 Ford Fairlane nicknamed “Big Red.”

“I used to go to shows year round with my wife (Carol) and the kids,” he said, “and there it sat at a Pomona swap meet – the car I’d been looking for my entire life. This was one of eleven two-door sedans built with a 427 (cubic inch), dual four-barrel four speed.” Murray said he bought it and raced it in California, and a few times after returning to Omaha, adding “It’s definitely a highlight of the collection.”

On the center of the floor is a bright red 1952 F-7 Big Job flatbed hauler, which originally enjoyed a life as a New York City fire truck, featuring overhead valve V-8 Lincoln motor. It carries a 1950 F-1 with a flathead V-8 with a five-speed, which Murray bought restored from a friend. “I always really liked it,” he said. “I take the both of them to shows – it’s always a good little head-turner.”

Half of the Murray Collection… At 20 Fords, the collector expects that he’s done collecting and is now enjoying. 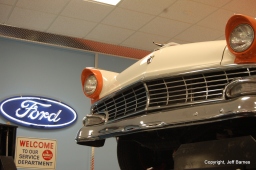 Grille of the 1956 Fairlane Club Sedan, a replica of his car from high school.

Murray is a huge fan of the 427 engine, the “heart” of many of the cars in the collection, and keeps one under glass.

He’s also got a 1964 Ford Thunderbolt, an experimental drag-race only automobile of which only 105 were built. “This terrorized the racetracks across the U.S.,” Murray said. “Ford Motor Company gave them only to professional drivers – it was too fast for average drivers, running 10.30s (seconds on quarter-mile tracks) out of the box.”

Atop one of the racks is a 1956 Fairlane Club Sedan, which Murray said is an exact replica of what he drove in high school, apart from having a 427 engine in it. He found the sedan at an auction in Iowa with 11,000 miles on it, and had to change the gray paint job to orange and white. The previous owner – a 90-year-old farmer – very rarely drove it, taking his pickup instead.

By contrast, Murray drives all of his cars and enjoys driving them. “People always ask ‘Aren’t you afraid you’ll wreck it?’ when they see me with one of my cars,” he said. “I always say, ‘No, that’s what insurance is for.’ The last accident I was in, someone rear-ended me at a stop sign in 1969.”

In the course of collecting, Murray added cars at a rate of one or two a year but says he’s done for the most part. For the expected finale, he’s building a 1961 Ford Starliner, the fastback version of the Galaxie that was used in NASCAR. You don’t see many, since production was limited and racing took a toll on those that were run.

“This one’s pretty unusual, with a 390 and 401 horsepower,” Murray said. “The color’s about perfect – black with a red interior. When I’m done I’ll take it on tour for a couple years before I start to drive it much.”