Omahan’s 1955 Caribbean Convertible is Optioned Out

His 1955 Packard Caribbean convertible is a true land yacht, meant to cruise in style, comfort and luxury. There’s power EVERYTHING in its two-and-a-half ton frame, sitting on a unique torsion-bar suspension system that keeps an even keel for a smooth ride. For what it’s worth, Jay Leno has one of these in his garage.

Hunter bought the car in 1977 with his wife Joan’s father. John Schumacher had been a Packard dealer in Nebraska City for as long as Packards were manufactured (1956) but the nostalgia factor caused them to look for one to share.

“He wanted one and I was handy with things,” Hunter said in explaining the partnership. “We found it in O’Neill – the previous owner was a farmer and car collector and was going to use the car to tow his boat-tail Auburn.”

It didn’t take much convincing to spend the $1,800 for it – this was a rare car. It had most of the offered options, only 500 were made, and this was number 13. When they got it home, they found out the engine needed an overhaul; Hunter did that and also replaced a second antenna. “We didn’t have to do too much more, other than a LOT of polish,” he said. Even the convertible roof was in great shape; Hunter had to replace the cylinder, but the pump worked great once he degummed it. 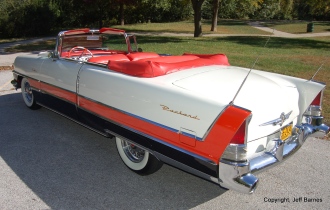 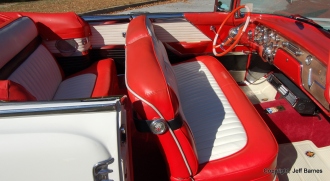 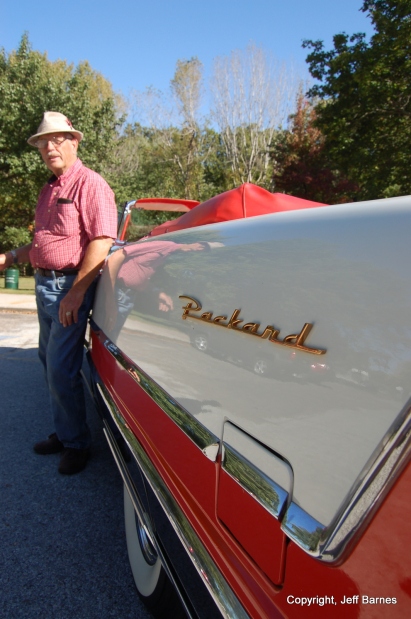 Schumacher often drove the car between Nebraska City and Omaha; when he passed away in 1986, he left the car to his son-in-law. In the years since, Hunter’s put in new seats, repainted 95 percent of the car, replaced the carpet and put on wire wheels to get it close to a being a fully optioned Caribbean.

“This was a car that was way ahead of its time,” he said. “It’s got power windows, brakes and seats, a heater under the seat, torsion-bar level ride suspension – it was considered ‘America’s Rolls-Royce’.” The Packard emblem and nameplates are even plated in 22-karat gold. He’s also added the original wire wheels to the vehicle and went to the added step of finding a 1955 Nebraska license plate from “55” county – the front plate has the initials “JMS” as tribute to his father-in-law.

The engine is Packard’s first overhead-valve V8, which displaces 352 cu. in. and replaced the old, heavy, cast-iron side valve straight-eight that had been used for decades. It turns out about 275 horsepower. “With a full tank of gas and myself, the car weighs just over 5,000 pounds,” Hunter said. “I’ve kept track of every time I’ve filled the car since the overhaul – it gets 8.5 miles to the gallon and you can get up to 15mpg on the highway.”

It’s a very distinctive car, even more so with the three-tone paint job of White Jade, Fire Opal Red and Black Onyx. Hunter, 75, is the semi-retired owner of Nebraska Leasing and Finance Company who has entered it in a number of shows.

“It’s ‘trophied’ out – we’ve won people’s choice, best of show, sponsor’s choice, and best orphan,” he said, for makes no longer manufactured or supported. “It’s really a pleasure to own and show.”

And it’s certainly rarer than when he and Schumacher bought it – he figures there are maybe only 200 Caribbeans left from that year, according to registrations. “There may be some in sheds that nobody knows about, but that’s about it,” Hunter says.