It’s doubtful many more of the cars featured at the July 27th Joslyn Castle Car Classic went through the restoration hell of John Rued’s 1953 Austin-Healey. 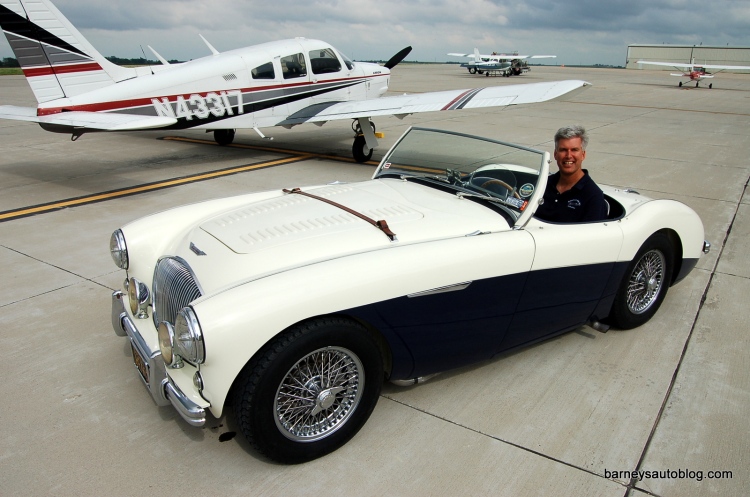 At 6’5 ½”, Rued moved the driver’s seat back and the foot well forward to sit comfortably in his ’53 Austin-Healey. The car is no longer a “ragtop” since the adjustment took away the top’s storage space.

The retired Air Force navigator has owned the car for 33 years, only five which had it on the road. The rest of those years were spent getting passed from restoration shop to restoration shop, almost always to the detriment of the spunky little sports car.

Rued grew up in California with a love for an Austin-Healey convertible. “It goes back to my mom,” said the 51-year-old, now a flight instructor at Advanced Air at the Council Bluffs Airport. “She had a ‘54 in college and told us of her exploits with it and pointed them out on the road every time we saw one. As far as I was concerned, it was the only car I ever wanted.”

He finally had his chance at age 18 when pedaling his bike past the home of a collector with four of the British imports in his front drive. The owner said he was interested in selling, “but added there was no way I’d be able to afford any of them,” Rued said. “He did say, however, that he had another one in a chicken shed and if he could get it started, he’d sell it to me for two-thousand dollars.”

The original engine was 90 horsepower; it’s now rated at 150-plus. Rued installed a larger radiator to take care of the Austin-Healey’s overheating problem.

The chicken-shed special DID start. Rued bought it and drove the ragtop for the first two years, but it was while cruising with a buddy along scenic California Highway 1 that the car blew a head gasket. “I was trying to get home as fast as I could on three cylinders,” he said, “when I sheared a hub stud and we started to fishtail wildly.”

The car sat while Rued began his Air Force career. He finally got the Austin-Healey into a restoration shop in southern California – and saw about 25 years of misfortune take place. The first shop went out of business, so the car was moved to a second shop that was hit and closed by the Northridge earthquake of 1994. The next shop went out of business when the owner died (causing Rued to wrestle with a realtor, insurer, and executor before getting it back).

“That guy wasn’t truly a restorer, though,” he said. “For example, I found Bondo was used on the frame. I got it into a quality shop at that point, but that guy was used to people who threw money at their cars – I was a navigator in the Air Force and very budget inclined. I had to pull the car back.”

Compounding the problems was Rued’s being stationed at Dallas “and every time I moved the car from one business to another in California, I was losing pieces from it.”

Rued eventually was stationed at Offutt AFB and found a top-notch Austin-Healey restorer in Eagle, Nebr., who finally got the job done. “I did throw a rod about a half mile from my home while on my way to Road America,” he said, leading to an engine rebuild last year. “I’m basically shaking out the car now.”

After 33 years of replacing lost and broken parts, plus the desire to improve performance and safety, what’s still original? “The front shroud, minus the hood,” Rued says, “the rear fenders, the instrument panel, the windshield, and part of the engine.” 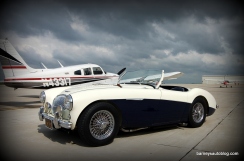 So why hang on to a car that seemingly appears cursed, at least as far as getting it rolling again? “This car was a piece of history that I didn’t want to be lost,” Rued said. “You just don’t see them much anymore. They’re part of automotive racing history, of man and machine’s interface against nature and no guarantee you’ll make it.”

There’s also something very personal. “About a year after I got it,” he said, “I started tracking down its history and previous owners, and found out one of them was one a mom in our neighborhood who carpooled kids to school. I remember riding in a really small car with two other kids and a convertible top – this was that car.”

Rued said he’s easily spent more on his Austin-Healey than it’s worth, “but I’ll never part with it.”