As soon as Russ Kathol restored his first Harley, he knew he’d be doing another. Now the Plattsmouth jeweler doesn’t know when he’ll stop.

Within his “dungeon” – aka, the basement of his Main Street jewelry store – Kathol has spent the last few years building motorcycles, specifically late ‘40s/early ‘50s-era two-stroke Harley Davidsons. The count is at six so far, but he’s got a couple more waiting in the wings.

Kathol finished his first Harley two years ago; it was a ’48 once owned by his father as a teenager to commute to school. The bike had deteriorated badly over years of being outdoors and being in storage until Kathol decided to restore it for his dad as a Thanksgiving gift. Repainted yellow (based on the color of a Skittles candy), Kathol was hooked on restoration/modification of the Harleys.

Kathol doesn’t buy intact bikes. “Everything I have was either pieced together or bought partially completed,” he said. “I’ll buy a whole motorcycle just to get the rack and gas tank.” Some parts are common – like brakes, levers, and horns – while seats and light assemblies are hard to find, with headlight assemblies going for up to $800. He’s on the Internet at least twice daily looking for parts he needs, getting original whenever possible.

He takes around five months to complete each restoration, aided by a friend who Kathol says knows much more about the bikes and their operation than he ever will. “He has taught me SO much,” he said, “but I know pieces, parts, and what I need.” Another friend with a tire shop helps out with the welding and powder coating. 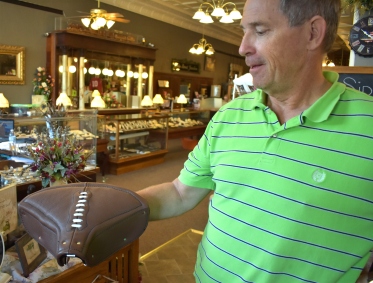 After completing a few bikes to add different colors of the Skittle spectrum (green, orange, and purple), Kathol decided to branch out a bit and make bikes with a theme. A long-time employee who died of breast cancer was the inspiration of a pink memorial Harley. The next one will have a Huskers theme, painted in white with a red stripe down the center, and a genuine stitched pigskin leather seat. The one after that is a military tribute, and adds a sidecar to a 1965 Harley 50cc.

He just bought a blue one to fully restore but has no plans for red. “There are so many of those out there already,” Kathol said.

Kathol admits that his motorcycles are an addiction that he’s not willing to kick – not just yet anyway. “I’m NOT trying to become a museum,” he laughed. “My wife and I bought an old church that’ll become our home. It’s got a 9,000-square-foot garage and we’ll have most of them displayed there.” 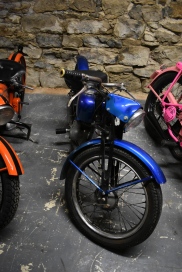 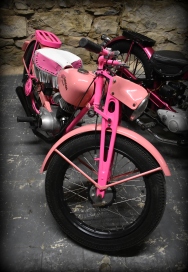 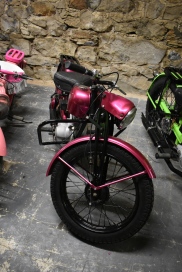 He said the orange cycle will be his daily driver to work and they will always have one on display in the jewelry store, typically in the front window where the yellow one is now located.

The nostalgia factor is huge with the bikes – their size and price made them popular with first-time motorcycle owners and many of those who rode one in their youth love to see them again.

“I always have customers walking in to see what I’m working on now, and once in awhile they might buy a ring or something,” Kathol said. “I’m always hoping someone will walk by, see the bike, and walk in saying ‘Hey, I’ve got an old Harley you might be interested in…’”